Emphysema is a long-term, progressive disease of the lungs that primarily causes shortness of breath due to over-inflation of the alveoli (air sacs in the lung). In people with emphysema, the lung tissue involved in exchange of gases (oxygen and carbon dioxide) is impaired or destroyed. Emphysema is included in a group of diseases called chronic obstructive pulmonary disease or COPD (pulmonary refers to the lungs).

Emphysema is called an obstructive lung disease because airflow on exhalation is slowed or stopped because over-inflated alveoli do not exchange gases when a person breaths due to little or no movement of gases out of the alveoli, leaving no room for fresh, oxygen-rich air to enter.

Emphysema changes the anatomy of the lung in several important ways. This is due to in part to the destruction of lung tissue around smaller airways. This tissue normally holds these small airways, called bronchioles, open, allowing air to leave the lungs on exhalation. When this tissue is damaged, these airways collapse, making it difficult for the lungs to empty and the air (gases) becomes trapped in the alveoli.

This effect impairs normal ciliary function and smooth muscle contraction, necessary for effective lung secretion clearance. As the emphysema causes inflammation which triggers additional mucus production in the lungs, there is often an excessive retention of mucus. This unfortunately provides ideal conditions for further infections to take hold. 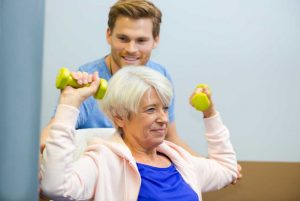 Once the natural defences of the respiratory system have been bypassed by some form of invading infection a normal inflammatory immune response usually occurs. The cell walls of the airways would become swollen, additional protective mucus is produced and white blood cells converge on the area to attack the invading pathogens.

In individuals with emphysema there are approximately 5 to 10 times higher number of macrophage white blood cells present in the lung tissues and fluids. There is also an increased number of neutrophil white blood cells that release excess amounts of proteases. These break down the protein based elastic structure of the airways cell walls. It is the loss of the cell wall elasticity that leads to the permanent dilation of the airways.

The permanent dilation of the airways, combined with the damage to the cells walls, is a cumulative process. The result is greater mucus production and retention, loss of functional lung surface and a greater risk of repeat infections.

Cigarette smoke contributes to this disease process in two ways. It destroys lung tissue, which results in the obstruction of air flow, and it causes inflammation and irritation of airways that can add to air flow obstruction.

What are the symptoms of Emphysema?

You can have emphysema for many years without noticing any signs or symptoms.

The following symptoms may begin gradually:

How is Emphysema Diagnosed?

To determine if you have emphysema, your doctor will ask about your medical history and do a physical exam.

Emphysema and COPD can’t be cured, but treatments can help relieve symptoms and slow the progression of the disease.

Although not strictly a treatment, most doctors make this recommendation for people with emphysema (and everyone). Quitting smoking may halt the progression of the disease and should improve the function of the lungs to some extent.

Doctors use several kinds of medications to treat the symptoms and complications of emphysema. You may take some medications on a regular basis and others as needed.

Here at Respiratory Physiotherapy Ireland, we can apply a range of therapy techniques and advice to manage your symptoms and maintain the best possible level of lung function and comfort. We can also advise on activity modification to make daily living easier. Along with advice for you and your family on appropriate self-management techniques to maximise your functional ability between therapy sessions.

What would physiotherapy treatment for Emphysema involve?

At Respiratory Physiotherapy Ireland, Our physiotherapists will ensure you receive specialised treatment for your emphysema. Giving up smoking has one of the biggest global health benefits to the improvement of this condition. Depending on the severity and duration of your condition, your treatment may involve:

Although there is no ‘cure’ for emphysema it is usually possible to improve your health and quality of life with the support of health professionals. Respiratory physiotherapists are an essential part of the team that can help you.

For more information on how physiotherapy can help treat emphysema or to book yourself an assessment, please contact us here at Respiratory Physiotherapy Ireland.

Have any questions? Call us now!

Have any questions?
Call us now!
Go to Top